The framework for Dementia-Friendly Lehigh Valley (DFLV) began back in 2013 as a committee convened by the Phoebe Center for Excellence in Dementia Care and the Phoebe Institute on Aging (PIA).

The original committee began the process with a needs assessment that included the following activities:

This review revealed that there were already a large number of existing services and supports available, more than in most areas of the country. This was attributed in large part to the long-term focus on geriatric care in the Lehigh Valley, as evidenced through the geriatric programs at Lehigh Valley Health Network and St. Luke’s University Health Network, the active professional networks for geriatric specialists, and the Lehigh Valley Alliance on Aging, which was convened by the United Way. These groups represent early “collective impact” initiatives that helped make the Lehigh Valley a leader in geriatric care, and laid the groundwork for the dementia-friendly work we are currently engaged in.

The committee then began to strategically target key partners to engage in the DFLV efforts. We held joint meetings and education sessions with the Chamber of Commerce, local legislators, representatives of the first responders in the Lehigh Valley, Disability Friendly Lehigh Valley Coalition, and faith community leaders. Some of these connections were fostered and supported by targeted PIA conferences.

In 2018, Phoebe Ministries provided funding for a series of “community conversations” forums to bring the work to a larger audience and engage more stakeholders. These conversations were facilitated by the Alzheimer’s Association based on a proposed vision to establish Philadelphia, Pittsburgh, and the Lehigh Valley as the three pillars of the Dementia-Friendly Coalition (DFC) across Pennsylvania. This was successfully carried off in 2018. Shortly after, conversations were initiated with the United Way and the Coalition was ultimately transferred to the auspices of the United Way as a collective impact effort under the Age Friendly Lehigh Valley Coalition. 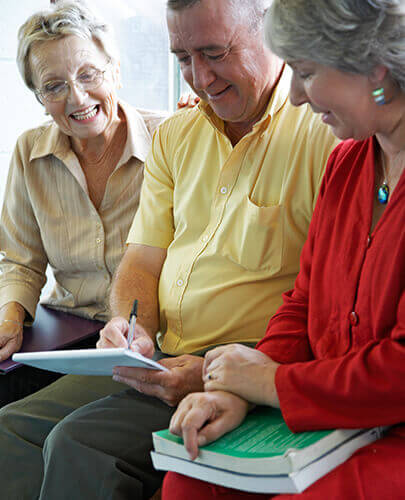